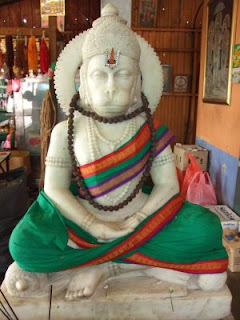 This quaint temple has acquired a staunch following in recent years, due to the magical presence of Lord Hanuman. This temple originated from a shrine at the KL Sentral monorail station. The shrine had shifted to Scott Road in the last 10 years, due to construction of the rail station. As Lord Hanuman is energetic, hence it is only befitting that its current chairman is active and youthful. Mr. Suresh, who is the current chairman of the temple, has been instilling his creativity into the temple. The new ‘gopuram’ of the temple will be characterised by Lord Hanuman’s tail, making the temple distinctive in design. 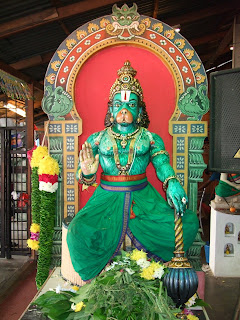 In the tale of Ramayana, Lord Hanuman was sent as messenger to meet Ravana at Lanka. Upon arrival at Ravana’s palace, Lord Hanuman was refused a seat. Therefore Lord Hanuman used his tail as a chair, elevating himself higher than Ravana. Lord Ravana becomes enraged, and orders Lord Hanuman’s execution. However, Ravana’s brother intervenes; pointing out that it is was unethical to kill a messenger. Ravana then orders that Lord Hanuman’s tail be lit instead. As Ravana’s guards attempt to set ablaze his tail, Lord Hanuman escapes from his captors. Lord Hanuman with his tail on fire burns down most of Lanka.

Mr. Suresh was inspired to design the ‘gopuram’ after having a magnificent vision of Lord Hanuman. Lord Hanuman appeared before him in a warrior pose, with his tail held upright. Lord Hanuman’s armour had razor trimmings attached, indicating that Lord Hanuman was ready for battle. Lord Hanuman guards this vicinity with much courage, and will eliminate evil forces when necessary. Once, a Malay lorry driver passed through Scott Road at 2am. He was startled when he saw an apparition of an enormous monkey attired with warrior garments walking along Scott Road. This only confirms that Lord Hanuman is always on patrol in this vicinity. Many devotees who have been afflicted by black magic or evil spirits come to this temple for spiritual recovery. Also, many students come to this temple to have Lord Hanuman’s blessings before proceeding for an exam. The blessing will enhance their courage, and allow for a victorious examination.
Address: Lot P.T. 22 Jalan Scott Brickfield Kuala Lumpur