Matha Saraswathi Devi is the goddess of education.Education is not the qualification we acquire.In simple way it is nothing but (wisdom)gnanam. If we possess the blessings of Matha Saraswathi Devi,our gnanam will be utilized properly. That gnanam transforms to vignanam, so that we can lead a respectful life in the society.The panchami has a great significance similarly.Star has the same.

As far as my knowledge is concerned getting education and receiving the blessing of Matha Saraswati Devi is very easy. After educating ourselves,we are not able to utilize the wisdom gained through education.To help you in that way it is only possible by Bhagawad Gita.So surrender yourself to Matha Bhagawad Gita.

There is a saying in words that at one instance Lord Brahma ,husband of Matha Saraswathi himself worshipped her for Gnana Siddhi..I know that you are so busy in the mechanical life but you can follow the simple guidelines.

Without any restrictions in routine,intime,you recite the whole sloka on the whole day.

2. Take the saraswathi Matha photo.perform pooja with yellow flowers,yellow fruits,prepare yellow prasadam(lemon rice). with your hands and offer it to Matha Saraswathi Devi with great Bhakti and Devotion.

3. Especially those who have less guru balam(guru sakthi)in their birth star should worship and pray Matha Saraswathi Devi.

4. Keep the children’s pens and books etc..near the Matha and then bless them by giving the required things with your hands.

5. Exclusively For Children(students):
Always keep the photo copy of Ganesha,Matha Saraswathi Devi and Lord Hanuman in your books. Before going to your studies justdo pranams to the three lords and proceed.Definetly you will be successful in achieving good ranks. This is True.

6. I wish all the elders and children to worship Matha Saraswathi Devi to gain wisdom of knowledge,good health, and life span.I wish you all SHRI PANCHAMI SHUBHAKANKSHALU.

Performance of Laksha Archana from 1-1-2013 to 10-1-2013. With the blessings of Lord Suba Mangala Anjaneya, the Laksha Archana was performed from 1-1-2013 to 10-1-2013 (Ten days) starting from 6 PM to 8 PM regularly . Sahasranama Archana on Sri Rama and Sri Anjaneya was  chanted with flower s and garlands. For this purpose 5 vedic students from Mylapore Sanskrit College were engaged daily with our family members and voluntary devotees. Thambula Dhakshinai were offered to them daily with Nivedhya Prasadams. The Laksharchana was success fully completed on 10-1-2013 by 9 PM.

Next day, on 11-1-2013, the Hanuman Jayanthi was performed with Garlands and and colourful flowers. Three types of Mega Garlands (Rose , Samandhi, and Sampanki) were adorned to Lord Anjaneya and Sri Rama. The temple was decorated with flowers and garlands. Noble and pious friends and devotees helped greatly for the pooja , garland, and flower expenses. With the great blessings of Lord Rama and Sri Anjaneya, the Hanuman Jayanthi was successfully performed whole the day and completed by 10 PM on 11-1-2013. 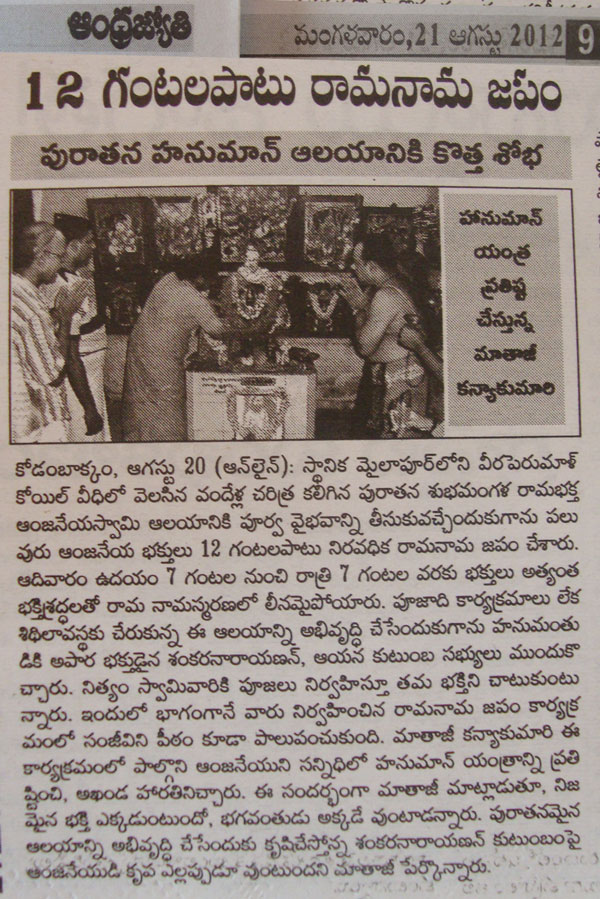 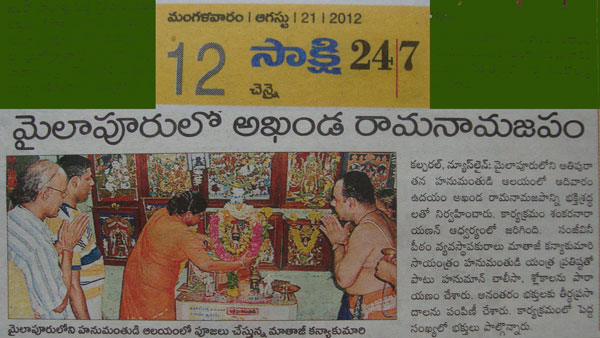 Through Sanjeevini Peetam website Mr. Shankaranarayanan announced that Akanda Rama Nama Japam will be chanted from 7 AM to 7 PM at Mylapore Anjaneyar Sannithi on Sunday 19-8-2012 . Eventhough we could not attend full day, we thought we should participate atleast for one hour in the evening. Mr. Shankara-narayanan family and others were chanting “OM SHRI RAM JAI RAM JAI JAI RAM” continuously for 12 hours without a break. The programme completed successfully with chanting HANUMAN CHALISA and other slokams after 7.00 pm. Mathaji performed Aarthi and appreciated devotion and dedication of Mr. Shankaranarayanan family for conducting this programme. Mathaji informed that we are lucky here to decorate Hanumanji and perform puja personally whereas in big temples we have darshan from distance. Chanting Rama Nama is done by us anytime but offering our service to God by cleaning and maintaining the place is part of Bakthi and devotion that adds to our Punniyam.
I must tell all of you that we could feel the vibration when chanting Rama Nama at that place. We came home with a sense of satisfaction that we used our evening time usefully. Our thanks to Shankarnarayanan’s family for giving us this opportunity.
Hari Hi Om.
Vatsala & Prasad

We are planning to chant “OM SHRI RAM JAI RAM JAI JAI RAM” continuously for 12 hours from 7 a.m. to 7 p.m. on Sunday.

To accomplish this, I request you to put this in your site in Internet, so that Sanjeevinipeetam members and other volunteers can join us in Akanda Rama Nama japam to add strength to the team.  Since this is Akanda japam, there should not be any break (even for a minute) in chanting for continuous 12 hours, so persons interested in continuous chanting can join us on Sunday, 19th August on seeing this in net.  Morning breakfast and lunch will be provided by us.  Though the place is small to accommodate many persons, we will try our maximum to accommodate persons and conduct this Akandam successfully with the blessings of Lord Hanumar.

This 14-letter mantra “OM SHRI RAM JAI RAM JAI JAI RAM” was given by the great marathi saint Samartha Ramdas.
I want to write briefly about Saint Samartha Ramadas and this nama, as follows:
Samartha Ramadas was born in a small village called Jaamb in Maharashtra in the year 1608 on the auspicious day of Ramnavmi (celebrated as the Birthday of Lord Shri Ram).  His parents were very pious with a family tradition of Lord’s worship for 12 generations.  As a boy, he showed immense strength, comparable to Hanuman, whom he worshipped all his life. Once his mother found him sitting all by himself in a room with his eyes closed, she asked, “what are you doing?”.  His reply was, “I am worrying about the world!”.  At the young age of twelve, he ran away from the wedding stage upon hearing the word “savadhan” which means “be alert.”

From there, afterwards he did spiritual practice on the banks of river Krishna. He chanted the name of Lord Rama for 13 Crore ( 1 Crore is 10,000,000) times, and meditated on the potent Gayatri Mantra for twelve years.  He lay for 21 days fasting at the doorsteps of Lord Rama’s temple to get his blessings. Seeing his yearning for God, the Lord himself opened the doors and initiated him with Knowledge (Jnana). He is one of those rare saints who got his initiation directly from Lord Rama without any Guru in human form. Following that, Samartha Ramdas traveled far and wide throughout the country to understand and explore the social life of common people, and to teach them the devotional path. He also constructed many temples of Hanuman who is the idol of strength, devotion, and intellect.
On hearing Samartha Ramadas’s Rama nama chanting 13 crore times, Anjaneya swami appeared in front of Ramadas as a big langur and told him to ask whatever he wants. Ramadas composed Bhimarupi Maruthi Stotram on Hanuman and requested whoever chants this stotra daily with bhakthi should be granted good health and able body. Hanuman agreed and granted the boon.

So, please join us on Sunday in Akanda Rama Nama japam and get the full blessing of Lord Ramachandramurthi and Lord Hanuman.